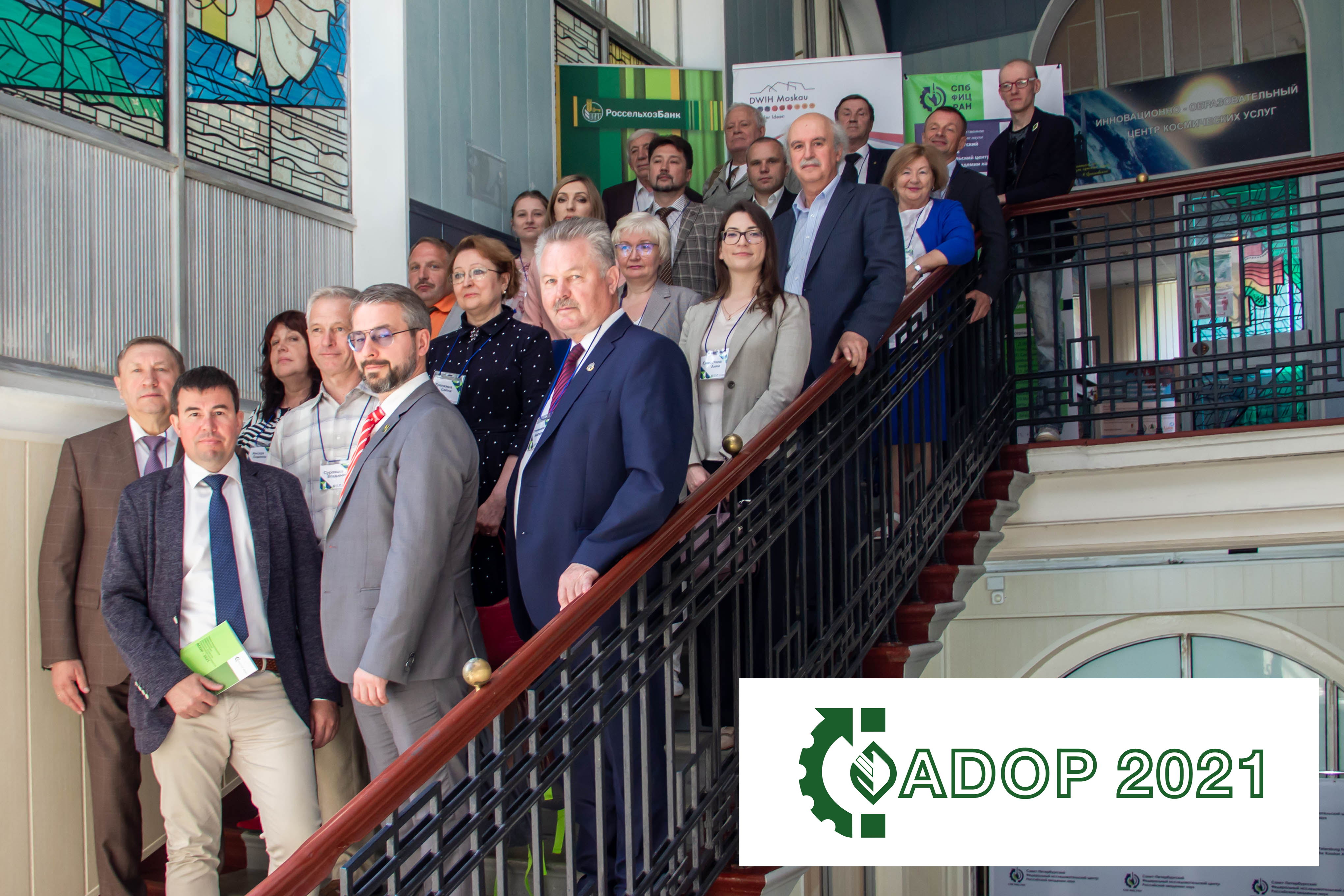 First International Conference on Agriculture Digitalization and Organic Production (ADOP 2021) took place in St. Petersburg from June 07-09, 2021. The conference organized by the Technical University of Kaiserslautern and the St. Petersburg Federal Research Center of the Russian Academy of Sciences (SPC RAS) conference was sponsored by the JSC Company "Russian Agricultural Bank "(JSC "Rosselkhozbank").

The conference was held with an active participation and support of the German House of Science and Innovation (DWIH, Moscow, Russia) within the events of the Germany Year in Russia on strengthening the Russian-German relations in the art and culture, language, education and science, tourism, environment and climate protection, economy and technology, renewable energy sources and steady development.

Welcome letters to the conference participants and organizers were send by the First Deputy Chairman of the Committee on Agrarian and Food Policy and Environmental Management of the Federal Assembly of the Russian Federation MITIN, Sergey Gerasimovich and the Chairman of the St. Petersburg Government Committee on Science and Higher Education MAKSIMOV, Andrey Stanislavovich.

ADOP-2021 Conference has combined two participation formats due to the world vast epidemic situation, at that, St. Petersburg Federal Research Center of the Russian Academy of Sciences served as a platform for full-time participationб also a video conference format was maintained  with a broadcast on the Youtube channel. Simultaneous translation into Russian and English was arranged for.

Within the conference, was organized an exhibition of robotic systems, unmanned aerial vehicles and autonomous greenhouse complexes of aeroponics, developed in SPC RAS under the interdisciplinary research on the digitalization of agricultural production.

The conference incorporated three plenary and six oral sessions. Plenary presentations were made by Academician of the Russian Academy of Sciences Alexander PETRIKOV, Deputy of the State Duma of the Federal Assembly of the Russian Federation, member of the State Duma Committee on Agrarian Issues Sergey YAKHNYUK, Deputy Prime Minister of the Udmurt Republic, Minister of Agriculture and Food of the Udmurt Republic Olga ABRAMOVA, Deputy Director for Research of the Institute for Strategic Studies of the Republic of Bashkortostan Alfiya KUZNETSOVA, Chief Consultant for milk production technologies GEA Farm Technologies RUS Johannes EGBERT and expert on feeding, specialist in herd management in milk production at GEA FT Walter WEIMANN, Director General of Leili Rus LLC Jeroen KEISER, specialist in farm management systems at DeLaval in Australia Ivan PEROV, Head of the Russian Office of the Kieselmann Companies Group Sergey BARANOV, Director of the Institute for Digital Security at SPbSMTU Nikolai GRYAZNOV, Professors of the Technical University of Kaiserslautern Karsten BURNS and Tim DALMAN.

Aspects of the state support for agriculture were considered in presentations made by  Sergey YAKHNYUK, Deputy of the State Duma of the Federal Assembly of the Russian Federation, member of the State Duma Committee on Agrarian Issues, and by Olga ABRAMOVA, Deputy Prime Minister of the Udmurt Republic, Minister of Agriculture and Food of the Udmurt Republic.

At the plenary session, Oleg FOMIN, Deputy Director of the St. Petersburg Regional Branch of Rosselkhozbank, delivered a lecture on "Digital Ecosystem for Agricultural Enterprises". For 20 years, Rosselkhozbank has been a system-forming credit institution and a reference bank of the agro-industrial complex, and in 2020 the Bank started implementing the strategic concept "More than a Bank". Rosselkhozbank is successfully developing an ecosystem “The Own Farming”, a marketplace “The Own Native”, a program “The Own Village”.

"Attracting the investors in the life cycle of science-intensive innovative technologies of the agro-industrial complex is a timely step, especially under conditions of risky agricultural production in the Northern Non-Chernozem region. Therefore, the participation of Rosselkhozbank in our conference and pilot projects on digitalization and robotization of agriculture is an important contribution to the development of the agro-industrial complex," commented Andrey RONZHIN, Director of SPC RAS and Chairman of the Conference Program Committee.

Accepted articles in English will be published in the proceedings of "Agriculture Digitalization and Organic Production" in the Smart Innovation, Systems and Technologies book series published by Springer, indexed in ISI Proceedings, EI-Compendex, SCOPUS and Springerlink.

The Conference resulted in the consolidation of interdisciplinary knowledge, and allowed for comprehensive considering the effective approaches to the adaptation of modern developments in robotics and digitalization for agriculture, ensuring the production of organic products with market-acceptable costs, and solving topical tasks in the development of animal husbandry and crop production.

"The conference played an important role in uniting the scientific departments of SPC RAS, which at the beginning of the reorganization used to be separate teams, into a single entity. The well-chosen subject matter of the conference bearing an interdisciplinary character, allowed scientists from all scientific departments of SPC RAS to find their places of research interest  in its program. An important result of the conference is the wide participation of managers and specialists of government bodies, and the best companies in the field of agricultural production. There was a bilateral exchange of knowledge and experience. Representatives of Agriculture and Agribusiness management got acquainted with the results of scientific research, and scientists were able to share and compare their vision of the most problematic issues of agricultural production. The preparation for the conference and its holding significantly intensified the activities of all staff members. A very important positive result of the conference is reaching the international level by young researchers. Their first publications with Springer Publishers and subsequent indexing in the Scopus/WoS database will strengthen their confidence in the broader capabilities – "commented Alexander Kostyaev, Academician of the Russian Academy of Sciences, Chief Researcher of IAERST – SPC RAS, Co-chair of the conference.

"Making arrangements for and running the conference were an important stage of integration with other institutes within SPC RAS. The conference has become an extremely useful source of new information for our researchers, and has expanded professional contacts between leading domestic and foreign scientists, representatives of governing bodies and authorities, industry unions, financial institutions, Russian agribusiness, and foreign companies," commented Vladimir SUROVTSEV, Director of IAERD – SPC RAS, Сo – chair of the conference.

Use of the professional potential of Russian scientists accumulated in robotics, information technology, agriculture, biology and economics will lead to achieving a sustainable development of the agro-industrial complex while facing the systemic global challenges, at that, ensuring the transition of agricultural production to a new technological order.

In the Conference decision was noted the high interest of domestic and foreign specialists in the event, the importance of interdisciplinary research and the need to hold the 2nd International Conference "Digitalization of Agriculture and Organic Production" (ADOP-2022) in St. Petersburg from June 06-08, 2022.